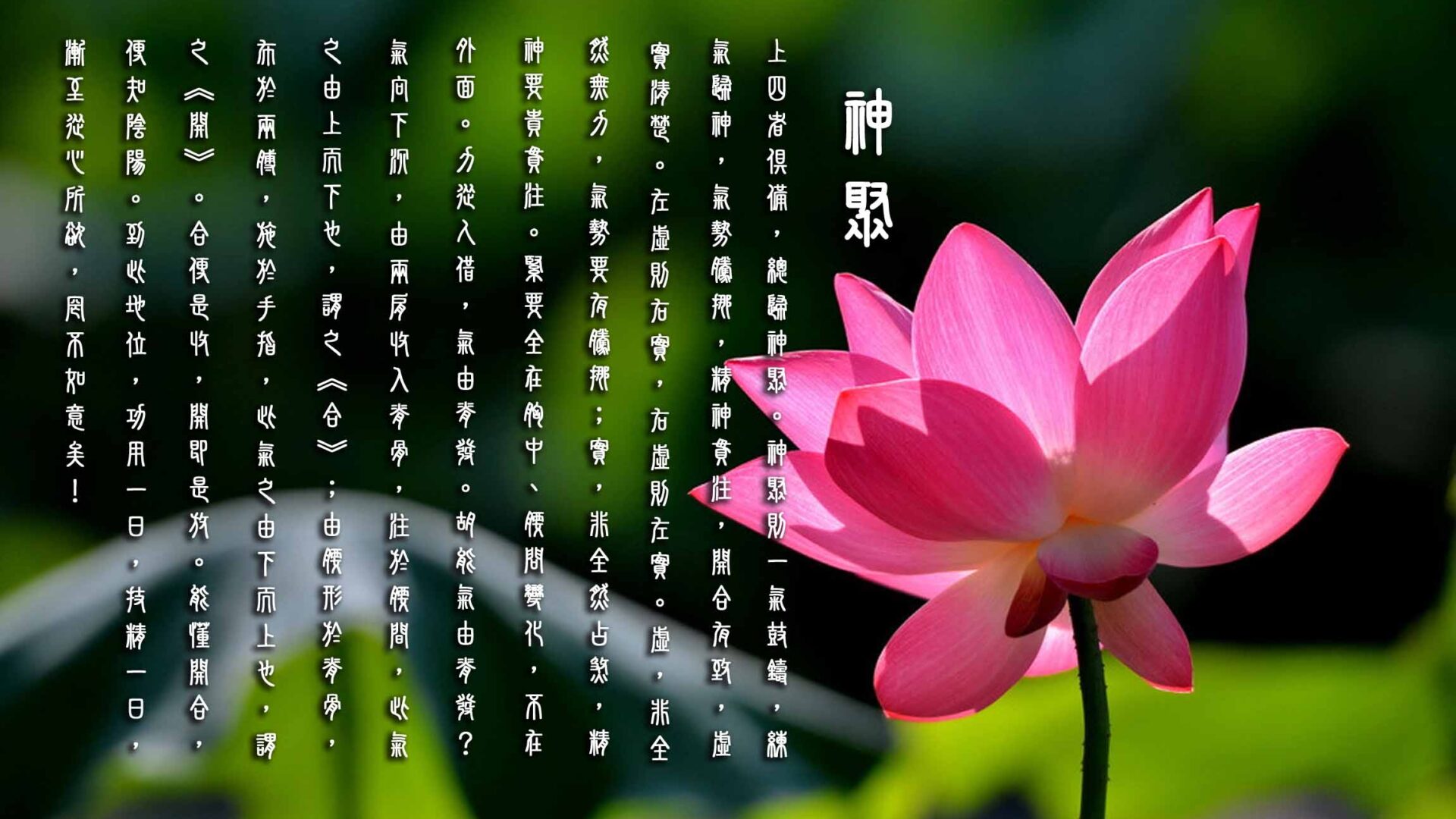 To release force from the spine, let the force sink down. Collect from the two shoulders towards the spine and down to the waist, the force travels down. This state is known as “close”. From the waist travelling up the spine, two shoulders and then fingers, the force travels up. This state is called open. Close is to gather. Open is to release. When you know Open and Close then you know Yin and Yang. When you reach this level, each day’s vital energy nourishes you. Gradually things follow your heart.  Nothing will make you unhappy. 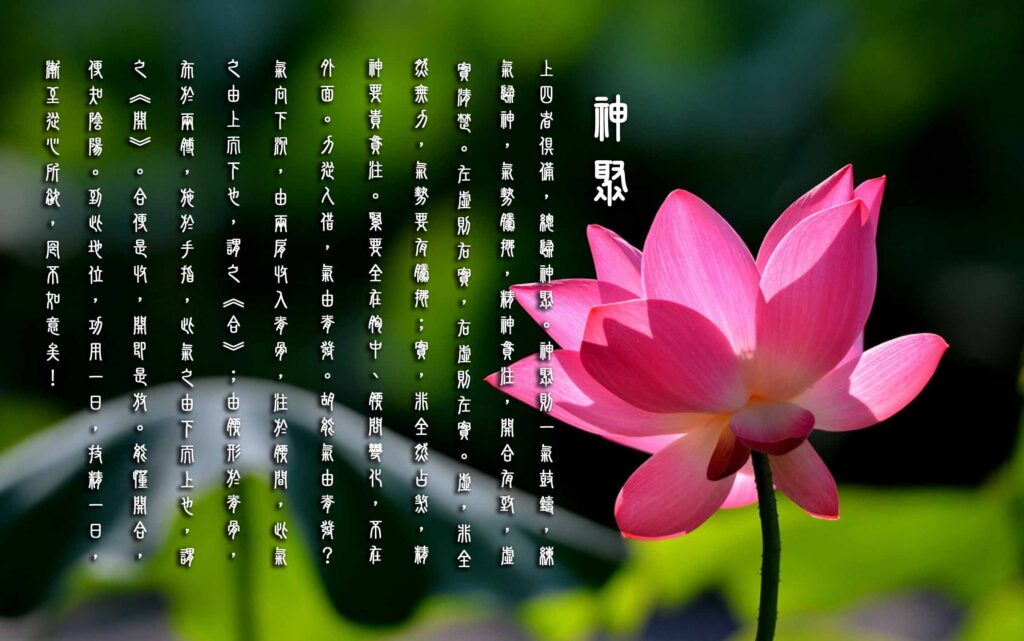 The Chinese word shén (神) can have a wide variety of meanings depending upon which word it is paired with. In the context of this verse, the word can best be translated to mean: energy, spirit, heart and mind. We use the phrase Vital Energy to represent all these things combined.

Prior to arriving at this final state of vital energy, the previous four character tactics must first be achieved:

When these previous four character traits have been achieved then vital energy gradually presents itself.  At this point, the goal is to keep it focused.

This state is very similar to what is described in the Taijiquan treatise as the final stage of learning: Spiritual Illumination (神明 shén míng). The same word shén (神) is used in the treatise. It takes many years of diligent practice at this level to achieve spiritual illumination or to become one with nature.

Internal force must always be present and ready. CLOSE is to gather the internal force while OPEN is to release it. When practicing tai chi forms, this is the ideal time to focus on our vital energy.  We do this by continually practicing both the Closing and Opening of our internal force. Our attention is internally focused when we practice in this way.

Practicing opening and closing internal force can be done with all of the tai chi form styles. Practicing tai chi forms in this way will both increase alertness while creating feelings of peace.  Practicing moving our internal force from close to open and back again improves the circulation of Qi and energizes the entire body.  Tai chi practitioners experience the ebb and flow of energy through their bodies. Becoming proficient with closing and opening internal force is how vital energy is focused.

Practice finding opportunities in the opponent`s substantial and insubstantial states to release or OPEN your own internal force at the appropriate moments.  This will create an imbalance within the opponent. This is the challenge and spirit of practicing push hands.

When you observe a master pushing hands, you will notice how little external movement is involved. The body remains fairly quiet and still most of the time. When a release of energy is executed, it happens in the blink of an eye and without warning. Almost as instantaneously, the master returns back to the same quiet state.

Sometimes, the master simply follows and sticks to the opponent, causing the opponent to lose balance with every single move. Typically, this happens when the master is simply toying with the opponent or creating a training opportunity.

THE PATH TO MASTERING VITAL ENERGY

To eventually achieve this level of proficiency ourselves, we start by practicing OPEN and CLOSE internal force by leveraging the predictable tai chi movements of forms especially the Yang style form which emphasizes the opening and closing of internal force.  Becoming proficient and achieving the focused surging of vital energy provides exponential health benefits for the mind, body and spirit when practicing tai chi.

To progress further, use push hands to challenge your own ability to access internal force.  It challenges the tai chi practitioner to experience or listen to changes in another person`s internal force.  Experiencing the substantial or insubstantial force as well as responding to these changes with willful changes of our own internal force trains us to dynamically gather or release energy as the need arises.

Focusing our own vital energy helps the tai chi practitioner remain balanced and healthy in mind, body and spirit.  When we can do this instantaneously at will and with gentle or subtle effort, we begin our journey to becoming one with nature and a spiritual master of tai chi.